Allen Say was born in Yokohama, Japan in 1937. His father was a Korean orphan who had been raised by a British family and his mother was Japanese-American. Say's book Tea With Milk is based on his parents' relationship. When Say was a young boy, his parents divorced. He had an unhappy childhood living with his father and later with his grandmother, neither of which he had a good relationship with. When he was a young man, Say became an apprentice to a cartoonist Noro Shinpei, who he had greatly admired. The book The Ink-Keeper's Apprentice is largely based on this experience. When Say was 16, he and his father moved to America, where Say was enrolled in a California military academy. He did not like this experience and was eventually expelled. Instead, Say went to high school, then later to the Art Center College of Design in Los Angeles. Later, he moved back to Japan where he worked as a sign painter. He eventually moved back to California where he went to Berkley for architecture. Shortly after this, he was drafted in the Army. Say then became a commercial photographer, and illustrator for several Harper & Row books. In 1988, he won the Caldecott Honor Award and Boston Globe-Horn Book Award for his illustrations in The Boy of the 3 Year Nap by Dianne Snyder. It was at this time he quit photography and devoted his life to full time writing and illustrating. He has been doing so ever since, and he currently resides in Portland, Oregon.

Allen Say draws on his own life experiences, memories, and family history in his books. Although he draws on these experiences, he does not believe that there is any such thing as a true story. He doesn't believe that he as a person is adequately portrayed through his writing and illustrations, and doesn't think the audience knows the real him. Say also writes about themes of creativity, belonging, and overcoming cultural of physical stereotypes. When writing his books, Say doesn't typically picture an audience. He said that if he had to choose a particular audience, he writes to his role model Noro Shinpei. Say's writing process is to do the illustrations sequentially and allow the story to come from them. He believes that if you write or draw something that seems pretty, chances are it is of no real value. Writing and illustrating children's book is Allen Say's passion, and he feels grateful that he is able to live his passion everyday. 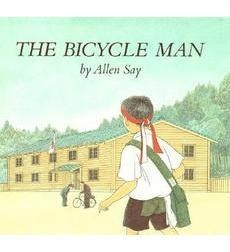 Review:
This book (video below) is based on an experience Allen Say had
as a young boy in Japan just after World War II. A school of
youngsters prepared their schoolyard for a sports game day. Parents
came to watch the events including racing, piggy-back rides, and
many others. During the events, a young, African American soldier
walks into the schoolyard and asks to try the bicycle. He performs
amazing tricks to everyone's enjoyment. This book is a wonderful
tale of the peace that can come after a war. 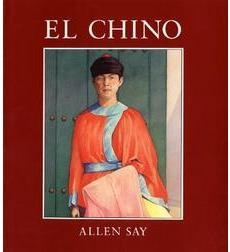 Review:
This is a biography of Bill Wong, a young Chinese boy who
grew up in the Southwest. His father always told him in
America he could be all he wanted to be. While on vacation
in Spain, Bill became interested in bullfights, and wanted
to become the first Chinese matador. The story is about
the prejudice he faced while doing this. It is an inspirational,
masterful story about rising above racism and prejudice. 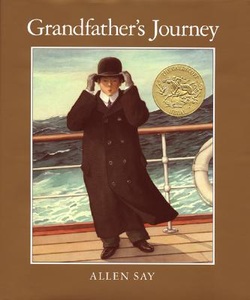 Review:
This cross-cultural book is based on Allen Say's
grandfather's journey emigrating from Japan
to America. It is told from the point of view of
a young man who reflects on his grandfather's
journey as he embarks upon his own. Both of the
men are torn between their traditional Japanese
culture and the culture-shock encountered in America. 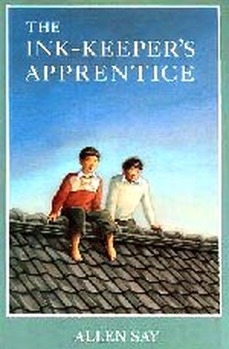 Review:
This book is based on Allen Say's boyhood as a fourteen-year-old in Tokyo, Japan
just after World War II. It features his experience apprenticing with the famous Japanese
cartoonist, and Say's mentor Noro Shinpei. Say writes of his first steps toward becoming
an artist, his eventual career, as he learns self-reliance. The story speaks of family,
friendship, loyalties, bonds, and the beauty of human relationships. 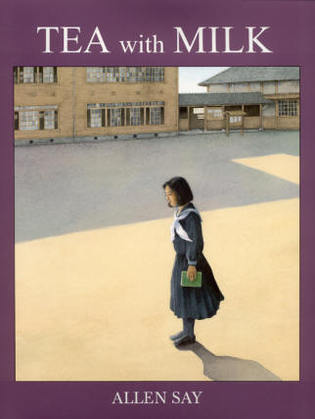 Review:
Tea with Milk is about a young girl named May, or Masako
in Japanese. As a child, May grew up in a San Francisco
household with her Japanese parents. She noticed many
differences between herself and her classmates regarding their
home lives. When May's family moves back to Japan, she
yearns for America. She does not like how people call
her Masako, and how she does not have the same freedoms
as a girl she enjoyed in America. May, craving independence,
gets a job in a department store in Osaka. When they discover
she can speak English fluently, the management uses May to
show out of town businessmen around the store. One of
these businessmen is a young Japanese man who also
grew up speaking English. This story is loosely based on Allen
Say's parents.


Stranger in the Mirror 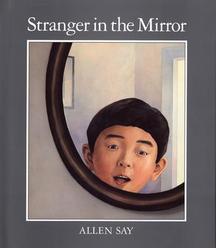 Review:
Sam, a young boy does not want to grow old like his grandfather.
One morning, he looks in the mirror and discovers he has the lined
face of an old man. His parents take him to doctors, who find nothing
wrong with him. Sam's friends and parents all look at him in a different
way as he tries to assure them he is still the same person. This book
provides an interesting insight into how American culture views aging
differently from other cultures.